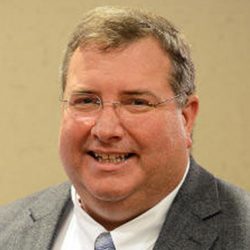 One of those ‘Hill boys’
Ask Randy Hill a question — about anything, even something mundane. Then, sit back and prepare to listen because you’ll likely hear a good story.

Maybe it’s his slow-paced, Southern-accented delivery. Perhaps, it’s the way he slightly leans in, as if to draw the listener into his confidence. More likely, however, it’s the twinkle in his eye that marks this man as a born storyteller.

Randy is the member services manager for Planters EMC, where he’s worked for almost 30 years. He added communicator to his resume in 1998. A membership in CCA followed in 2002.

Recent Institute attendees will recognize Randy as the auctioneer coaxing bidders to benefit the Sullivan Fund. Soon after the 2018 auction wrapped, he took the time to tell a story or two about himself.

Tell me about the childhood that ultimately landed you at Planters EMC.
I grew up on a rural, country farm in southeast Georgia. Our family was very cash poor, but overflowing with love. We fought each other, but defended family from others.

I was the baby of five boys. My brothers drove my mother crazy picking on me.

When I was a baby in diapers, they would stick the bathroom plunger to my bare back and carry me around like a ball stuck to a vacuum hose.

Not only did I play ball with my brothers, but I was the ball. They would throw me, and sometimes catch me.

I was a target. They would shoot me with plastic darts and sometimes BBs.

They taught me to swim by throwing me off the creek bridge.

I had a great childhood, and somehow I lived through it.

One day, while on the farm, I vividly remember a Planters EMC serviceman restoring power to an irrigation center pivot after a brief thunderstorm. A decade later that same serviceman became a mentor when I started working at the cooperative.

What led you to CCA?
I never dreamed I would someday be responsible for company communications. I would rank myself as the last person to be able to handle that job, but after a three-person department became a one-person department, it became my job. That’s when I started looking at others who were communicating well, and Greg Brooks from Walton EMC stood out. I said to myself, “If Greg Brooks is communicating a certain way, I need to be doing the same thing. If he is in CCA, I need to be a member.”

What’s new in your job?
I believe in being a lifelong learner. I recently earned my sUAS license, or drone pilot’s license. I believe drones will help us post images and communicate better with members during extended outages. When people see hurricane, tornado or storm damage up close, they are a little more sympathetic about why their power may be out.

What are your hobbies?
Since I was a little boy, I always wanted to be a pilot. A family friend working for an agricultural chemical company took me to see a crop duster in action one morning. His company filled the spray tanks for the crop duster, so I was able to get real close to the plane. The prop wash when the pilot turned the plane around for takeoff nearly knocked me down, but I was hooked for life in that very moment. I never became a crop duster, but I did become a private pilot. I don’t fly anymore since kids and family responsibilities got in the way. I tell my kids that my plane fund got diverted to their college fund. Perhaps someday when they graduate, I can buy a small plane and visit the grandkids. I hope life happens that way.

My other hobbies include spending time with my family, watching college football and dove hunting.

If I wasn’t working as a communicator, I’d be a:
Bush pilot, flight instructor, missionary, lineman, auctioneer or agriculture teacher. Take your pick.

What’s something most CCA members don’t know about you?
A snake bit me when I was 8 years old. I was walking down a dirt road near my house barefooted. My brothers passed by me in a car. I turned to watch them and evidently I stepped on the snake. I yelled and my brothers came to my rescue. They drove me to the hospital traveling well over 100 mph. I survived both the snakebite and the car ride. My foot swelled to twice its normal size, but I recovered a few days later. I was the talk of second grade when I returned to school. I never knew what kind of snake it was, but you could see the fang marks in my foot. My brothers said the snake died since it bit me. You just got to love those Hill boys.